"We're having a hard time keeping up with the calls," said Ilion's fire chief about the recent increase in COVID-19 cases throughout Herkimer County. 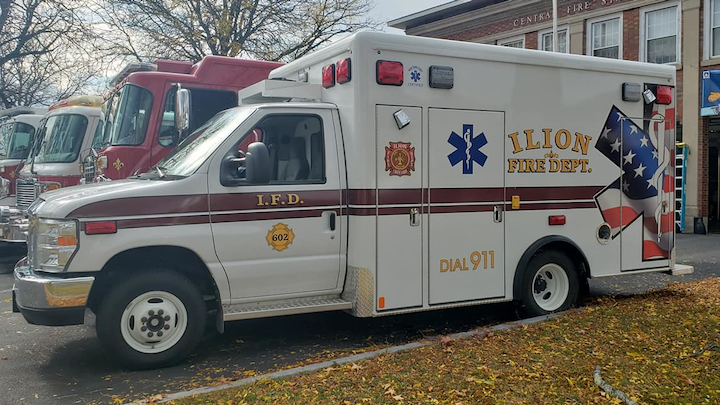 The recent rise in the number of COVID-19 cases in Herkimer County and the increased need for hospitalizations have put a strain on some local ambulance services.

"Calls have skyrocketed all around the valley," said Ilion Fire Chief Thomas Pedersen in a telephone interview Monday. His department has two ambulances to respond to emergency medical service calls. "We're having a hard time keeping up with the calls. We're bringing in Kunkel and Kuyahoora ( Valley Ambulance Corps) because we're running out of ambulances."

He added, "Both of our ambulances are out on calls right now."

The week of Jan. 2 saw an increase of 762 new positive cases in the county and as of Monday, Jan. 11, 56 patients were hospitalized.

"I've been at MOVAC nearly every day for the past two weeks and we're setting all kinds of records with the number of calls," said MOVAC President Greg Eisenhut.

Transports to hospitals are taking longer than usual, he said. " St. Luke's is backed up." That means ambulances must wait to move patients into the hospital, tying up vehicles and emergency medical personnel for longer periods of time, he added.

"The big problem is that the hospitals are getting slammed," said Hasse. "You can't turn around a call in 10 or 15 minutes." Crews are waiting one to two hours before they can move a patient into the hospital. "It ties up our ambulances."

While KVAC has transported a number of COVID-19 patients from the Kuyahoora Valley area, the numbers have not been as high as in some parts of the county, he said. He noted that the service has expanded its coverage area to provide ambulance service to the town of Morehouse in Hamilton County as well as to the communities in the Kuyahoora Valley.

While Herkimer firefighters don't provide an ambulance service, they do serve as first responders for medical calls in the village. "We've been very active in it," said Fire Chief John Spanfelner, when asked in a telephone interview about the impact of the uptick in coronavirus cases. "Now with the numbers going up, our calls are increasing more and more every day."

He estimated that three out of four calls to which the village department responds are COVID-related.

COVID-19 calls for the Little Falls Fire Department ambulance have been sporadic, according to Fire Chief Rob Parese. "We have our share. We just make sure we take precautions." The department provides fire and ambulance service to the city as well as town of Little Falls and part of the town of Manheim.

"We desperately need one or two more vehicles," Eisenhut said of MOVAC. "Our fleet is too old. The challenge is we have no reserve funds." Two MOVAC ambulances were struck by deer recently and one is likely totaled, he added.

"We're doing our best with a full contingent of crews, trying to honor our commitment to mutual aid with the crews and vehicles we have," he said, adding that mutual aid calls are in addition to calls within the area of MOVAC's certificate of need. MOVAC provides emergency medical services and primary ambulance services to the villages of Herkimer, Mohawk and Dolgeville and the town of German Flatts, excluding the village of Ilion, as well as providing services to the towns of Manheim, Salisbury and Stratford and part of Oppenheim, according to the MOVAC website.

About a quarter of the members of Ilion's career department have received the COVID-19 vaccine, Pedersen said, and the department is working to schedule appointments for the others at one of the three sites in the county offering the vaccine — Primary Urgent Care in Herkimer, Little Falls Hospital and Mosaic Health in Ilion. Volunteer firefighters and police are among those can begin receiving the vaccine this week under Phase 1B, he noted. Mosaic announced Monday it could not offer appointments to people qualifying under Phase 1B until more vaccine is delivered.

As for the impact of the pandemic on personnel, one member of the Ilion department was quarantined near the beginning of the pandemic, three were out in November and two are out now, according to Pedersen.

At KVAC, a little more than 25 percent of the crews were out at some point during the pandemic and a couple of weeks ago filling shifts was a challenge. "We're past that now," said Hasse, adding that he hopes there won't be a repeat of that situation.

A few members of the Herkimer Fire Department have had to quarantine due to exposure to people with the virus. "They're essential workers though; they come to work but they wear masks and practice social distancing," said Spanfelner.

1 entry in the News

1 entry in the News

Copyright © 2006-2021. YourFirstDue Inc. All Rights Reserved. Designated trademarks and brands are the property of their respective owners. Content on this web site is supplied by Kuyahoora Valley Ambulance Corps. YourFirstDue Inc. cannot be held responsible or liable for any content, text, pictures, or any other media found on this web site. Maintained by the members and staff of Kuyahoora Valley Ambulance Corps.
Management Login
Powered by